The Six Month Waiting Period: Getting A Divorce in California

Home / Blog / The Six Month Waiting Period: Getting A Divorce in California

The Six Month Waiting Period: Getting A Divorce in California 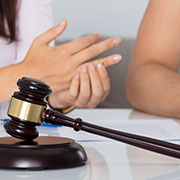 The infamous six month waiting period, also known as the “cooling off” period, can be confusing for many, and we are frequently asked about the specifics here at Rubin & Levavi, P. C. So we decided to take this opportunity to clear the record and provide key facts about the six month waiting period in this brief write-up. Remember, this serves as general information, for more in-depth answers be sure to reach out to a qualified family law attorney today.

The Divorce Can Only Be Finalized After the Waiting Period

The six month waiting period is mandatory, and in California, you should not expect for your marriage to end until one day after the cooling off period has expired. Once this time has passed, either party is free to remarry.

The Waiting Period Is Not Based Upon Separation

Contrary to popular belief, couples who want to get a divorce do not have to be separated, and in many cases continue to live together while waiting for the six month waiting period to pass. Likewise, separation by itself does not set this cooling off period in motion, and is formally determined by the date during which the divorce papers were served.

A Judgement Can Take Place Before The Waiting Period Expires

Hopefully this article sheds some light into the specifics behind the six month waiting period, as well as the additional considerations that you need to account for before moving forward with your divorce proceedings. Nonetheless, your best bet is to consult with a seasoned family law attorney.

Have any questions relating to family law or divorce in California? be sure to reach out to the experienced attorneys at Rubin & Levavi, P.C. to learn more about how we can help.